The oldest known name of Renesse is Riethnesse. This name is mentioned for the first time in 1226 in a document. The name has changed over the years and probably stems from Riethnisse (a reeded low-lying land) or Reenisse (low and ditched crossed land). So, there was a piece of land that stuck like a nose a little bit in the sea where reed grew.

The residents, who mockingly were called ‘zandloapers’ (sand walkers) were talking about Renisse. A second nickname was ‘geitenbokken’ (goatmen), because almost everyone had goats here in those days. It was the ‘cow of the poor man’. And poverty was common in the western parts. 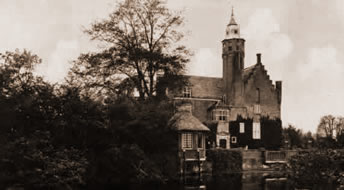 The Renesse of those days was a so called ring village, because it was built around the picturesque church. This Gothic Jacobuskerk is a building whose tower dates from before 1458. The ship dates from the 16th century. There were not many roads to the beach in those days. The most important one was the Laône. This narrow road ran through the dunes where an iron lighthouse was constructed (1856). Unfortunately it was demolished again in 1916. The lighthouse keeper was living in Zeerust at the time (the house among the dunes). Zeerust is still a household name in Renesse. 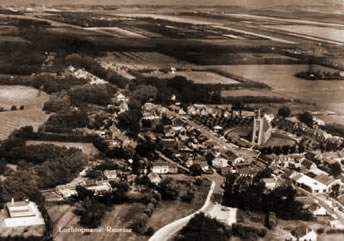 Early on, the first seaside visitors arrived in the 20th century. They found peace and quiet here. Including well-known names like Albert Plesman and Anton Pieck. The first summer houses were built, close to the beach of course. Because bathing became quite popular since 1900, many entrepreneurs saw that money could be made and on a small scale amenities were built for the tourists, especially by placing a beach tent, in those days it was called a ‘refreshment tent’. At this establishment, people could rent swimwear among other things.

In 1911, a number of progressive notables founded the Vereeniging Renesse Vooruit (Association Renesse Forward). This organization was intended to point out the touristic qualities of Renesse to foreigners. The extension of the steam tram track Zijpe - Brouwershaven to Burgh made Renesse significantly more accessible since 1915. In the early twenties the first campground on the Hogezoom was opened, where also the first summer cottages were built.

During the disastrous floods of 1953, Renesse remained dry and its residents took care of a lot of fellow island citizens. After the disaster, when Schouwen-Duiveland became a peninsula due to the dams of the Delta Plan, tourism expanded significantly and bungalow parks were constructed. Many (fruit) farms were transformed into campsites that, each year, became more luxurious with the demands of the times. But in spring and fall one can still find rest. The space is still there with beautiful beaches, dunes and endless polders.

The recreation sector of Renesse made a number of large-scale quality improvements over the past few years. The modern tourist will find the peace and space like the old days in and around Renesse, as well as the entertainment, the luxury, and the convenience that suit the requirements of this time. Thus Renesse has become a seaside resort, where young and old folks alike will feel at home.